They are either championed as brave voices willing to speak out against the scientific majority or dismissed as cranks who lack the evidence to support their arguments.

Now deniers of global warming have been dealt a stinging blow by psychologists who found skeptics of man-made climate change tend to believe in conspiracy theories.

They say the conspiracist outlook taken by many climate change skeptics is harming the public debate over global warming.

They found around a fifth of the comments about the research ‘can be considered conspiracist’.

It builds on a previous survey that the researchers conducted, which found up to 40 per cent of those who are skeptical about global warming use imagery that invoked conspiracy theories.

This includes the use of words like ‘scam’ and repeated references to faked data and collusion between scientists and governments to deliberately conceal evidence.

Professor Stephan Lewandowsky, an experimental psychologist at the University of Bristol who led the work, said: ‘These results add to a growing body of research on the nature of internet discourse and the role of the blogosphere in climate denial.

The paper, which is published in the Journal of Social and Political Psychology, provides a damning view of skeptical bloggers and those who comment on their websites.

The term ‘conspiracy theory’ is often used as a way of dismissing and ridiculing a person’s beliefs.

Well known conspiracies include claims that the existence of alien life has been covered up and that the Moon landings were faked.

The majority of scientists deny there is a conspiracy to paint climate change as worse than it is and Prince Charles, who campaigns on environmental issues, recently insisted there was no such conspiracy.

He said the international bodies that now accept the threat of climate change could ‘scarcely be accused of being part of some half-baked conspiracy dreamt up by extreme environmentalists intent on undermining capitalism’.

Last month Andy Gorman, commentator for Grow Food, Not Lawns, was instructed by the city to deconstruct two raised bed gardens he had built on his property. The reason? In the words of the city:
“The raised bed structures contribute to a reduction in the ability for safe pedestrian passage where the only alternative to sidestep the sidewalk in the event of heavy foot traffic is into the street.”

This is not the first time Gorman has been asked to remove these structures, which he believes are in full compliance with all applicable codes. Andy was asked to pull the structures down six months prior to the mid-June letter.

“Yeah the gardens aren’t coming down,” said Gorman in a Facebook post related to the incident. “They couldn’t show me any codes I was violating 6 months ago so I can’t foresee anything has changed. They say that the gardens have to be set back 2 feet from the sidewalk.”

Despite Donald Trump’s claim this week that he avoided serving in the Vietnam War solely due to a high draft number, Selective Service records show that the purported presidential aspirant actually received a series of student deferments while in college and then topped those off with a medical deferment after graduation that helped spare him from fighting for his country, The Smoking Gun has learned.

During a TV interview Tuesday morning, Trump–who spent his high school years enrolled at the New York Military Academy–said, “I actually got lucky because I had a very high draft number. I’ll never forget, that was an amazing period of time in my life.”

He went on to recall, “I was going to the Wharton School of Finance, and I was watching as they did the draft numbers and I got a very, very high number and those numbers never got up to.” The word “deferment” was not mentioned by Trump during his chat with the morning show hosts on WNYW, the Fox affiliate in New York City.

By the time his number (356) was drawn during the December 1, 1969 draft lottery, Trump had already received four student deferments and a medical deferment, accordieg to military records on file with the National Archives and Records Administration. An extract of Trump’s Selective Classification record, seen here, was provided in response to a TSG records request.

Eye in the sky: a “pre-crime” surveillance system

A company called Persistent Surveillance Systems has built a “pre-crime” surveillance system. The idea is that you fly a cluster of video cameras over an area that can be the size of a small city — using an airplane or even a drone — and you transmit the day’s activities of the entire city to a computer on the ground. When a crime is committed, a system analyst can scrub the video forward and backward in time to find out where the perpetrator came from and where they go after. Ideally, this happens minutes after the crime is committed so the perps can be apprehended. Radiolab recently had a great piece on this technology and its privacy implications.

Should You Use AES or TKIP for a Faster Wi-Fi Network?

A court recently revealed via email that the UK government had been spying on Amnesty International. GCHQ had put Amnesty under surveillance — despite this having previously been denied — and now the human rights organization wants answers.

In a letter to the UK Prime Minister David Cameron, Amnesty International asks for an explanation for the surveillance. The Investigatory Powers Tribunal’s (IPT) email made it clear that GCHQ had been intercepting, accessing and storing communications, something that Amnesty International’s Secretary General, Salil Shetty believes “makes it vividly clear that mass surveillance has gone too far”.

Amnesty International explains to Mr Cameron that it is deeply concerned about the revelations. The letter says that the victims of human rights abuses that the organization helps will have cause to believe that not only has the government intercepted data about them, but that it may have been shared with foreign governments. More importantly, perhaps, it’s something that will be of concern to those considering seeking help from the organization.

A row over online privacy and domain-name ownership has reached its peak on the last day of its public comment period.

The proposal put forward by domain name overseer ICANN will prevent any owner of a “commercial” website from using so-called proxy services – where a third-party provides their corporate details on the records of a domain instead of the actual owner’s.

This is useful if you’re a small or one-person entity, or not really a commercial concern at all, and you want to keep your details private because you’ve registered your domain with your home address.

So using a third-party proxy means that when someone looks up the physical address registered to a domain name via Whois, the address returned will be the third party’s and not the actual personal home address of the domain owner. It’s like a PO Box on the internet. All domains must have a registered address, and domain records are publicly available.

Proponents of the plan to reveal people’s addresses – which include, surprise, surprise, Facebook and brand protection company MarkMonitor – say it would “prevent malicious activity,” and argue that criminals use the service to hide their true identities.

Opponents argue it would subject many groups, individuals, and organizations to harassment, and there is little or no evidence that such a change would reduce online crime. Private details should only be made available through a court order or similar official process, they contend.

Robots Can’t Kill You—and Claiming They Can is Dangerous

If we start holding robots responsible for their actions – and accidents – we let their human designers and operators off the hook.

Robots’ involvement in human deaths is nothing new. The recent death of a man who was grabbed by a robot and crushed against a metal plate at a Volkswagen factory in Baunatal, Germany, attracted extensive media attention. But it is strikingly similar to one of the first recorded case of a death involving an industrial robot 34 years ago.

These incidents have happened before and will happen again. Even if safety standards continue to rise and the chance of an accident happening in any given human/robotic interaction goes down, such events will become more frequent simply because of the ever-increasing number of robots.

This means it is important to understand this kind of incident properly, and a key part of doing so is using accurate and appropriate language to describe them. Although there is a sense in which it is legitimate to refer to the Baunatal incident as a case of “robot kills worker”, as many reports have done, it is misleading, verging on the irresponsible, to do so. It would be much better to express it as a case of “worker killed in robot accident”. 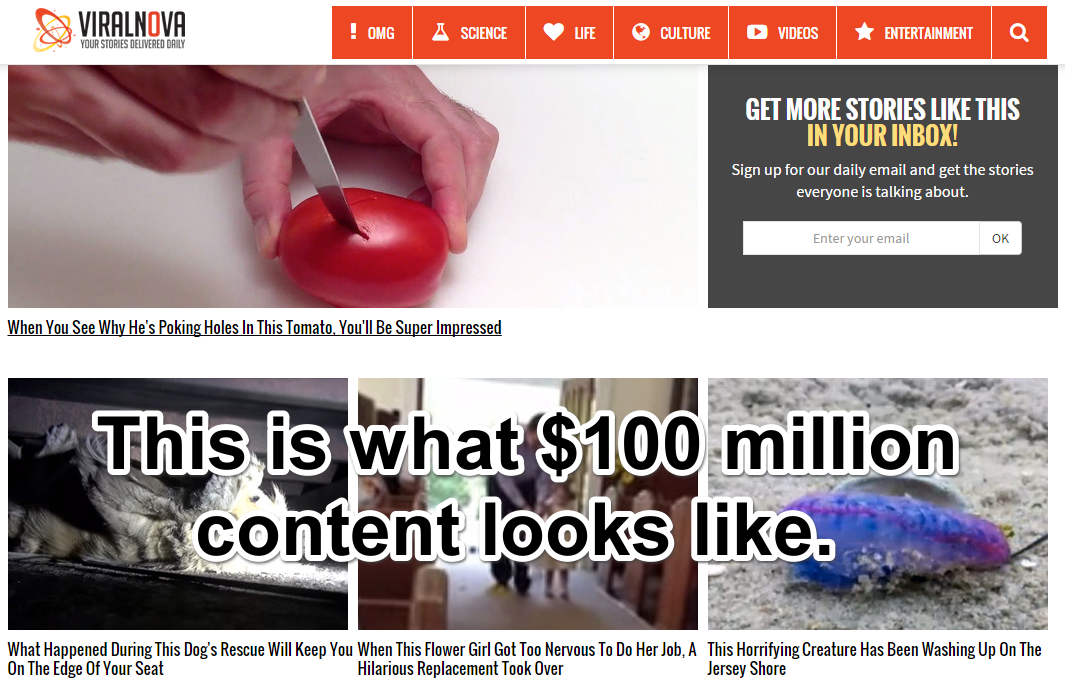 The dream of the highbrow internet is dead.

This week, the viral aggregator ViralNova was acquired for $100 million dollars. Meanwhile, the Pitchfork spin-off film criticism site The Dissolve ceased operations with an internet_meaningful blogpost entitled “The End.” The divergence between the missions and lifecycles of these two media projects that both launched in 2013 leave me wondering, “WTF is value?” It is certainly not creating #niche content for ‘intelligent audiences.’

Over the past two years, we’ve learned that there isn’t any actual monetizable ‘cultural value’ in building a content farm with an authoritative voice or domination of a niche area. Instead, it is more important to chase quantifiable human metrics by shoving lowbrow content in front of Facebook users. This is exactly what ViralNova has done better than most content farms–it figured out the current system and #growth_hacked the hell out of it. ViralNova out-media-companied The Dissolve.

You’ve got to give the people what they want. And by ‘people’, I mean seemingly abstract traffic data that adds value to your media company.

ViralNova achieved $100 million in value not just because of its deep well of forgettable content–it’s also a ‘technology company’ with its own content management system and the analytic tools to find out what is going viral. They have innovative technology that allows them to A/B test their Facebook headlines. It has a staff of 24, and it is likely a few content farmers’ jobs to sift through memes of the day from other sources (and identical sites), shoving them in front of millions of likers.