“This practice is exactly what they [Coalition to Stop Gun Violence] are doing,” said Erich Pratt, spokesman for Virginia-based Gun Owners of America. “It’s one thing if someone is using a gun in an illegal or unlawful manner. No one is questioning that. But this clearly sounds like swatting.”

See also: In 2010, 38-year-old Erik Scott was shopping in a Las Vegas Costco while legally concealing a firearm. A Costco employee noticed the concealed gun and called the police to tell them there was a man with a gun inside the store. The store was evacuated once the police arrived and Erik Scott was executed in front of swarms of Costco customers. Scott, a Westpoint graduate, was a former Army officer. It’s a miracle that only one person was murdered as this unfolded. 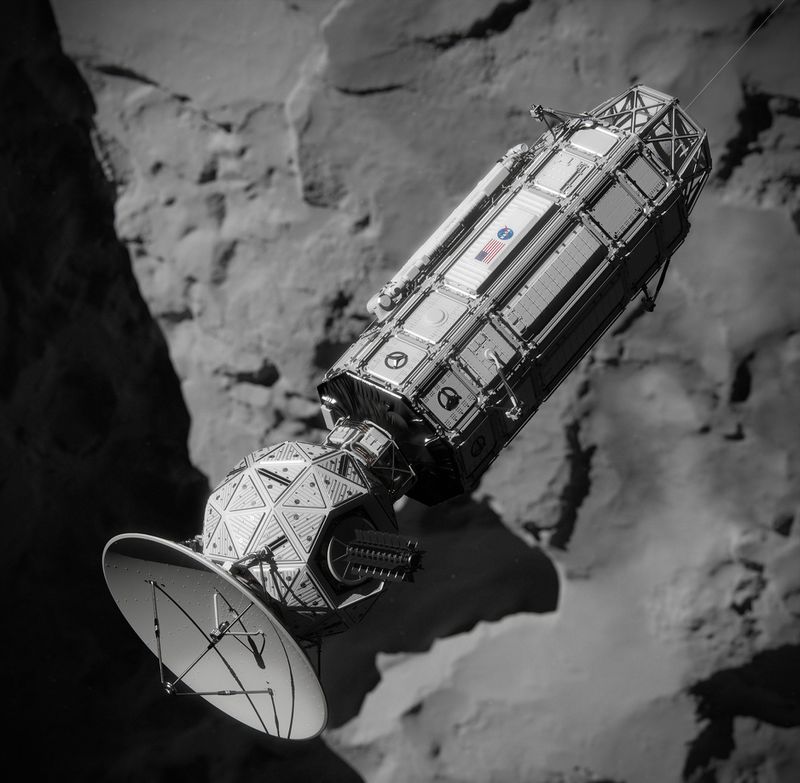 NASA engineers say they have come up with an easier way of exploring comets and asteroids in our Solar System: harpooning fast-moving space rocks. The idea is to make a probe — called Comet Hitchhiker — that would “catch rides” on asteroids by spearing them with tethers. Once the vehicle finishes a ride with one asteroid, it will disconnect and hitch a ride with another. The idea was dreamed up by NASA’s Jet Propulsion Laboratory as a way of using less fuel to land spacecraft on these space rocks.

Right now, landing objects on asteroids is tough since these rocks move at a speed of about 15 miles per second. So a spacecraft has to be much faster than an asteroid to catch up. Then if it does reach the asteroid, the vehicle has to slow down to match the object’s speed. Asteroids and comets are pretty small too, with low gravitational pulls, so the spacecraft has to do most of the work to land. This braking process requires a lot of propellant.

The hitchhiking idea would get rid of the need for fuel during the landing process, JPL says. Think of it like going fishing. When the spacecraft meets up with an asteroid, it will cast out its line; harpoons will shoot out tethers to connect the spacecraft to the rock. The vehicle will then extend the tethers a bit so there isn’t too much tension on the rope. (Fishermen also do this when they hook big prizes, so their line doesn’t snap right away from too much force.) Eventually the spacecraft will match the velocity of the asteroid. When it does, the probe will reel in its tethers very slowly in order to land.

A new study from Microsoft researchers warns that many types of databases used for electronic medical records are vulnerable to leaking information despite the use of encryption.

The paper, due to be presented at the ACM Conference on Computer and Communications Security next month, shows how sensitive medical information on patients could be pilfered using four different attacks.

[ Also on ITworld: Low and no-cost ways to learn about IT security. Don’t miss a thing! Sign up for ITworld’s daily newsletter. ]

In the light of increasing cyberattacks against the health care industry, the researchers recommended that the systems they studied “should not be used in the context of” electronic medical records.

They focused on encrypted relational databases based on the design of CryptDB, which allows SQL queries to be performed on scrambled data.

Databases of this design often use property-preserving encryption (PPE) schemes to allow searching. PPE schemes have been long known to leak non-trivial information, “but the extent to which these systems are vulnerable, however, has never been investigated,” they wrote.

Bryan Ware, an inventive dad in San Francisco, has come up with a brilliant way to reuse leftover crayons that get thrown out by restaurants and schools – he melts them down and recycles them into new crayons for children at hospitals.

He came up with the idea in 2011 when celebrating his birthday at a restaurant. His waiter had brought his two sons some crayons, and he wondered where the crayons go after they’re done with them. His discovery that they get thrown out led to the Crayon Initiative, which delivers crayons to hospitals throughout California.

Every year, up to 75,000 pounds of crayons get thrown away by restaurants and schools

He then pours them into special custom molds

He makes 96 new crayons each time he does this

The finished crayons are delivered to hospitals throughout California

IF YOU LIKE YOUR 401(k), YOU CAN KEEP YOUR 401(k): Obama Labor Dept. Sets Stage for Nationalizing Retirement Accounts

In 2013, in a little-heralded case, the U.S. Court of Appeals for the Seventh Circuit rejected the Obama Labor Department’s attempt to punish voluntary retirement plan service providers. The DOL, under the direction of the controversial, radical leftist Tom Perez, had tried to force providers of 401(k), 403(b), IRA, and related services to adopt a massive new set of regulations known as “fidiculary” responsibilities.

The Seventh Circuit slammed the door shut on Labor and the Supreme Court thereafter declined to hear the appeal, which meant that the Obama administration had lost in the highest court in the land.

Of course for the “most transparent administration ever”, that step simply meant that the court’s opinion was to be rejected and that Obama would use his infamous pen to rule by executive fiat. After all, the ends justify the means, correct?

Furthermore, financial services experts have cautioned that the new rule is “too complicated to [actually] put into practice.”

“For the modern mad men and wolves of Wall Street, gone are the days of widespread day drinking and functional cocaine use. Instead, in this age of efficiency above all else, corporate climbers sometimes seek a simple brain boost, something to help them to get the job done without manic jitters or a nasty crash.

For that, they are turning to nootropics,” writes Jack Smith IV on the cover story for an April 2015 edition of the New York Observer.

Nootropics, and other biohacks are now drawing mainstream scrutiny and controversy as more and more people are using legal, off-label, and unscheduled “research chemicals” as nootropics to enhance their academic or work performance.

this essay was co-written with Michael Brandt

The controversy stems from the fact that many nootropics currently sit in a regulatory void, skirting around the edges of powerful lobbyist and interest groups. While daunting for startups at first glance, operating within regulatory haze among powerful entrenched interests is really just par for the course in Silicon Valley.

For example, Uber is currently warring with dozens of taxi and transportation commissions across the globe; Zenefits had to face shutdown threats in Utah; and 23andMe recently earned FDA authorization for performing genetic tests for Bloom Syndrome after several years of being outright prohibited from offering genetic health analysis.

The nootropics and biohacking industries together with regulators need to build a framework that fully legitimizes the field and allows end users to safely utilize enhancement products.

Industry Ahead of Regulation

The purview of the FDA can be divided into two broad categories: scheduled (i.e. prescription or over-the-counter) drugs approved for treatment for a specific disease or condition, or 2.) supplements and foods which are generally regarded as safe (GRAS) and allowed limited health claims.

In addition to compounds found in the first two categories, nootropic hobbyists and biohackers often dabble and experiment with substances in an emerging third category — chemical compounds taken for performance enhancement (and not therapy) without formal FDA approval or scheduling. Nootropics in this class are sold on the open market as “research chemicals” and cannot be labeled for human consumption.

Even with this risk, people still buy and use these compounds because there’s preliminary but promising data showing that nootropics can increase working memory capacity and endurance, and mitigate risks of neurodegeneration and Alzheimer’s.

Pope Francis will not be hard to find on television during his visit to the United States.

His speeches, Masses and other appearances in New York, Philadelphia and Washington will be broadcast live, in parts or in their entirety, on national news networks, religious networks and in New York on Time Warner Cable’s local news channel, NY1.

But for some viewers, that might not be enough.

For them, Time Warner Cable is rolling out the Papal Visit 2015 channel, a sort of C-Span for fans of the pope, telecasting around the clock on Channel 199 in most areas from the opening event of Francis’ tour, a Mass in Havana on Sept. 20, until Shepherd One lifts off from Philadelphia International Airport on Sept. 27.

The papal channel will be available to Time Warner’s subscribers in New York and more than two dozen other markets around the country, 15 million households in all. It will also be available online and on the TWC News app.