Prague zoo claims to have the longest salamander on Earth

The critically endangered animal is the largest amphibian on the planet.

In a statement Sunday, the zoo says Karlo, a Chinese giant salamander it received 19 months ago from the State Museum of Natural History in Karlsruhe, Germany, is likely the biggest representative of its species. The zoo says, according to the latest measurements done Friday, that Karlo is 1.58 meters (5 feet, 2 and 3/16 inches) long. 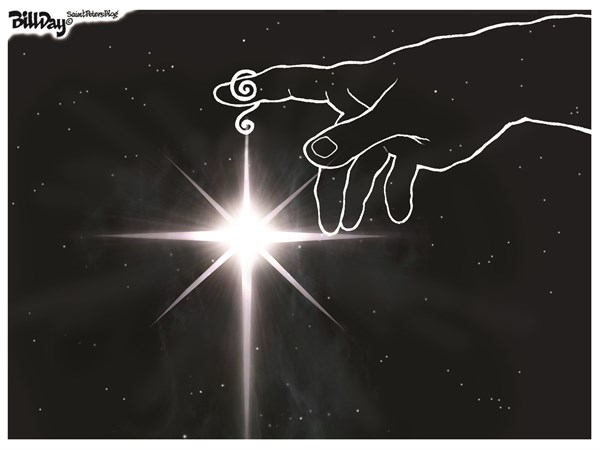 Every day seems like Christmas here at Personal Liberty®. That’s because we gift-wrap an issue (or two) for you every day, and we sit back and watch you open it. And your opening it is the greatest gift we can receive. We know that if you keep opening your “present,” then we have given you what you desire: the unvarnished truth. And you have given us what we desire: your loyalty and participation.

I’d like to think you all come here for a daily dose of a skeptical look at conventional wisdom and the truth you can’t find anywhere else. I know that most of you come here for that; but there are others who are here for different, sometimes more sinister reasons. That doesn’t matter.

Merry Christmas to you: every one of you. My continuing gift to you is my promise to you. We will always do our best to present the unvarnished truth to you every day, whether you like that truth or not. There are no sacred cows when it comes to personal liberty… or Personal Liberty®. We will point out the criminals in government — and criminal government — whenever and wherever we find them. We will expose the progressives and totalitarians when we see them. We will fight the police state. We will give you our take on the events of the day, regardless of whose feelings get hurt. We are not controlled by anybody, and we are not funded by anyone or anything beyond our hard work.

31,000 Americans died as a result of drinking too much

Last year, nearly 31,000 Americans died as a result of drinking too much—a 37% increase from 2002. And those deaths are just the ones from causes like alcohol poisoning and cirrhosis, the Washington Post reports. If deaths from drunk driving and accidents or homicides involving alcohol were included, the number would be nearly 90,000, per the CDC. The rate of alcohol-induced deaths seen in 2014 is a 35-year (at least) record, and the number of deaths (30,722) is higher than those from heroin overdoses and prescription painkiller overdoses combined (28,647).

High tuition costs and disappointing career-returns from university degrees have lead many to seek an alternative to mainstream education. The problem with a lot of universities is that the programs are more theoretical than practical, lacking the hands-on approach that students need to thrive in the “real world.” Some, like Elon Musk, have developed what are known as “unschools,” which simply means student guided learning, with a hands on approach. But MIT and UCLA dropouts, Jeremy Rossmann and Ashu Desai, believe in an approach that is not only hands on, but easy on the students wallets.

Rossmann and Desai developed the Make School in 2012 at the age of 23. With help from a start-up funding program, YCombinator, the pair of dropouts was able to move into Silicon Valley, America’s start-up capital, and get their project off the ground. As of now, they’ve already taught over 500 students.
continue http://www.theplaidzebra.com/an-mit-student-dropped-out-to-build-a-progressive-university-with-no-tests-or-tuition/

At 108 US Colleges, More Than Half Of Students Haven’t Paid Even $1 On Their Student Loans

That the student loan bubble is one of the many “subprime” crises (because as of this moment there are just too many asset bubbles to count thanks to 7 years of global ZIRP, NIRP and QE) has been documented here ever since 2012. We also explained that the main reason for soaring college costs is the cheap and easily accessible government-funded student debt, which at last check was over $1.2 trillion and rising exponentially.

Today, the WSJ had an article on just this, titled “U.S. Helps Shaky Colleges Cope With Bad Student Loans” in which it explained in fine detail what our readers knew already, namely that it is the government’s direct intervention with trillions in “aid” that is making the debt default problem far more acute than it would have otherwise been, and leads to keeping millions more “students” in college where they end up learning no marketable skills in a job market that rewards mostly waiters and bartenders, yet loads them up with untenable debt.

Like we said: nothing new. There was however one stunning fact buried deep in the article.

While we knew that overall student loan default rates for all US colleges were in the 8-10% range based on the Fed’s quarterly consumer credit data, what was stunning is that the “non-repayment” rate, or the percentage of students who haven’t made a single dollar toward their loans within three years of leaving college is a crisis-worthy 21.3%. This means that of the millions in college graduates from the 2010 and 2011 cohort (and since then the job market for recent graduates has gotten worse), more than a fifth don’t have either the means or the intention to repay even one of the tens of thousands of dollars they owe..

Authorities in Switzerland are looking to hold an upcoming referendum in order to decide whether or not they will proceed with banning commercial banks from creating money. The government confirmed that it would hold the referendum after a petition received more than 110,000 signatures that called for the central bank to be given the sole power to create money.
The campaign is being led by the Swiss Sovereign Money movement, and they are looking to limit financial speculation by requiring private banks to hold 100 per cent reserves against their deposits. “Banks won’t be able to create money for themselves any more, they’ll only be able to lend money that they have from savers or other banks,” said the group. If they are truly interested in ending fractional reserve banking then that would mean that they are finally ready to move in the direction of sound banking methods.

The 1.5-hectare lake is one casualty of rising global temperatures, which are already causing shifts in environmentally sensitive parts of Alaska, Siberia and Canada’s north. Like much of the region, the terrain around Fort McPherson is covered in permafrost, often contained in icy headwalls up to 30 meters thick. This ice was deposited tens of thousands of years ago during the retreat of the Laurentide Ice Sheet, but over recent decades, warmer weather and heavier rains have accelerated thaws that mark the landscape with great slumps of earth and crater-like scars dozens of meters wide.

The process that led to the demise of the lake is known as a permafrost thaw slump. It begins when rain and heat melt headwall ice, exposing previously frozen soil and sediment that is in turn washed away to uncover more ice, driving a cycle that over decades or mere years can eat away entire hillsides. A single slump can displace up to 10-million cubic meters of ice and sediment — enough to fill the Toronto Blue Jays’ stadium six times. The flow of this debris can create pools of sucking mud that behave like quicksand and have been known to trap large animals.
CONTINUE https://news.vice.com/article/that-lake-that-was-going-to-fall-off-a-cliff-in-canada-actually-did

Families celebrate the first day of Kwanzaa, the day after Christmas. Unlike Christmas and Hanukkah, Kwanzaa is not a religious holiday, and is only decades old.

Students at an ultra-liberal Ohio college are in an uproar over the fried chicken, sushi and Vietnamese sandwiches served in the school cafeterias, complaining the dishes are “insensitive” and “culturally inappropriate.”

Gastronomically correct students at Oberlin College — alma mater of Lena Dunham — are filling the school newspaper with complaints and demanding meetings with campus dining officials and even the college president.

General Tso’s chicken was made with steamed chicken instead of fried — which is not authentically Chinese, and simply “weird,” one student bellyached in the Oberlin Review.

Others were up in arms over banh mi Vietnamese sandwiches served with coleslaw instead of pickled vegetables, and on ciabatta bread, rather than the traditional French baguette.

“It was ridiculous,” gripes Diep Nguyen, a freshman who is a Vietnam native.

As if to promise a Christmas present, Congress has just finished approving the finances of the federal government for the next few months. Santa Claus would have done a better job. During early 2016, Congress will pay the government’s bills by borrowing money from individual and institutional lenders. Those folks will lend the feds all the money the feds need because the law requires the feds to pay them back.

The “pay them back” ideology is a very curious one. It is true that the full faith and credit of the federal government guarantees the payment of the government’s debts. Without that lawfully binding guarantee, who would lend money to an institution that carries a debt of $18.8 trillion? So the investors who have lent money to the feds know that their debts will be repaid in a timely manner.

Because the federal government spends $1.5 trillion more annually than it collects in taxes and other revenue and because its payments of interest alone on the money it has borrowed will soon be about $1 trillion a year, it can only repay its debts by borrowing more money. Since 1911, the federal government has not repaid a debt from tax revenue. It has always borrowed more money to pay its lenders. This is known to economists as rolling over the debt.

President Woodrow Wilson—who gave us a racially segregated military and federal civilian workforce, brought us into the horrific and useless World War I, arrested Americans for singing German beer hall songs in public, campaigned for the federal income tax by promising it would never exceed 3 percent of income, helped to create the cash-printing Federal Reserve, laid the groundwork for Prohibition, and kept Jim Crow going—borrowed $30 billion to pay for World War I. That money was borrowed from investors and from the Federal Reserve, which in those days literally printed the cash that it lent.