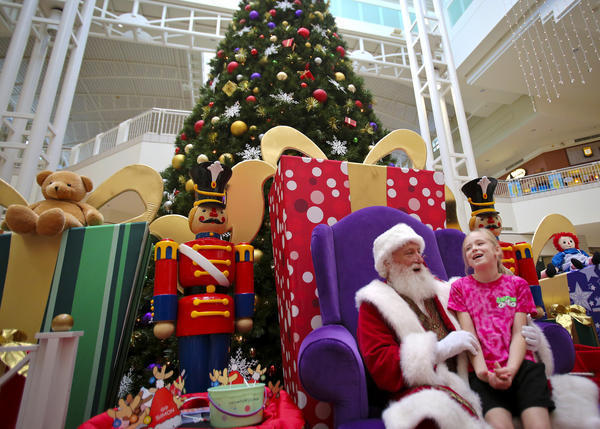 A Sanford mall Santa has to say his “ho, ho hos” elsewhere after telling two children that Hillary Clinton was on the naughty list.

A major privacy group has filed a lawsuit against the FBI to force the bureau to release all relevant documents about its plan to share a huge amount of biometric information with the Department of Defense.The lawsuit filed by EPIC (Electronic Privacy Information Center) concerns the FBI’s Next Generation Identification system, which comprises fingerprint, iris scan, and facial recognition data, and the bureau has been using it for several years.“With NGI, the FBI will expand the number of uploaded photographs and provide investigators with ‘automated facial recognition search capability.’ The FBI intends to do this by eliminating restrictions on the number of submitted photographs (including photographs that are not accompanied by tenprint fingerprints) and allowing the submission of non-facial photographs (e.g. scars or tattoos),” the EPIC lawsuit says.“The FBI also widely disseminates this NGI data. According to the FBI’s latest NGI fact sheet, 24,510 local, state, tribal, federal and international partners submitted queries to NGI in September 2016.”Privacy advocates, including EPIC, have said that the new database presents serious problems because of the high error rates seen with facial recognition systems. Also, the collection and storage of that data is a significant risk for the people whose information is in the database.

Controversial San Francisco 49ers quarterback Colin Kaepernick unwittingly found himself at the center of another storm on Friday as his praise for Fidel Castro was spread hours before the Cuban dictator’s death was announced. On Friday afternoon, Kaepernick’s praise for the communist leader’s education system sparked divide among fans. He was explaining why he wore a t-shirt bearing the politician’s image in August when he credited Castro for ‘investing’ more in schools than in prisons. Hours later, Castro’s death was announced by his brother Raul on state television. Twitter users were quick to pick up on Kaepernick’s ill-timed comments.

Save the Planet from Climate Change: Tax Meat by 40%

There’s a brand new way to save the planet, and a group of professors from Oxford University wants to force the issue by assessing enormous taxes on foods said to have higher “climate impact.”To make a long story short, they want to force everyone that doesn’t have a high income to become vegan by taxing the living daylights out of animal products.

If you think your grocery bill is out of control now, just you wait if these scientists get their way.By taxing items like beef by 40%, dairy products and poultry by 20%, and certain vegetable oils, the planet will be saved.Forty percent.That means a pound of ground beef that now costs $6 would cost $8.40. A gallon of organic milk would also go up by $2-3, depending what you pay now.

The financial impact would be massive. Average humans won’t be able to afford to eat much besides beans and rice.In a study dated November 7th, 2016, the Oxford Martin School, part of Oxford University, suggested a system of taxation to discourage people from buying and eating certain foods. The scientists suggested that the foods which contribute the most to the anthropogenic global warming, the man-made-global-warming-turned-climate change that we hear so much about, will be taxed at a higher rate. The report states:

Source: Save the Planet from Climate Change: Tax Meat by 40% | The Real Agenda News

AppNexus Inc., operator of one of the biggest digital advertising services, has barred Breitbart News from using its ad-serving tools because the conservative online publisher violated its hate speech rules.AppNexus scrutinized Breitbart’s website after U.S. President-Elect Donald Trump tapped Steve Bannon, former executive chairman of Breitbart, to be White House chief strategist last week. The digital ad firm decided the publication had breached a policy against content that incites violence, said AppNexus spokesman Joshua Zeitz.“We did a human audit of Breitbart and determined there were enough articles and headlines that cross that line, using either coded or overt language,” he said.{snip}AppNexus’s decision comes while the two largest digital ad sellers, Alphabet Inc.’s Google and Facebook Inc., grapple with the rise of fake news — misleading or intentionally deceptive articles that appear in social news feeds and online search results. Last week, both companies said they would pull advertising support from sites that spread “misinformation.”

Twitter to crack down on spies wielding its APIs • The Register

Twitter will begin clamping down on unauthorised police surveillance of its users.Data and enterprise executive Chris Moody (@chrismoodycom) did not specify the action Twitter would take against developers who use its APIs for commercial spying services, other than saying it would crack down “soon”.Moody’s warning comes in response to the suspension of Chicago-based location-tracking company Geofeedia which had its access to Twitter’s API revoked after the American Civil Liberties Union reported it was selling services to police.Law enforcement were using the data to monitor protests and other gatherings.The tracking company was also locating users using Facebook and Instagram, until access to those services was also cut.Twitter’s Moody says using its APIs and Gnip data products for surveillance of protests is “absolutely unacceptable”.”Recent reports about Twitter data being used for surveillance, however, have caused us great concern,” Moody says

Source: Twitter to crack down on spies wielding its APIs • The Register

Hackers electrocute selves in quest to turn secure doors inside out

Kiwicon Not every demo at security cons goes off without a hitch: Badass hackers Ryan and Jeremy electrocuted themselves when building what could have been the first device capable of wirelessly exploiting door-opening push buttons.The pair demonstrated the trial and terror process of building the box at the Kiwicon hacking event in New Zealand last Friday.Before its insides dissolved due to extreme heat, the device was capable of activating the push buttons that open doors to allow egress from secure buildings – but from the outside of that building.Ryan and Jeremy’s beefed-up electromagnet is the latest in a niche line of research which would allow attackers to enter buildings by using the devices to unlock the push-button door controls.”I guess they really are touch-to-enter buttons,” Jeremy told the 2,000 laughing hackers at the Michael Fowler centre, Wellington.”Should you be worried about this? Ehh probably not.”

Source: Hackers electrocute selves in quest to turn secure doors inside out • The Register

The mainstream media’s transparent quest to tarnish President-Elect Trump’s image by insisting his adviser and former Breitbart executive Stephen Bannon is a bigot has reached absurd new levels.CNN anchor Brooke Baldwin asserted on Tuesday that Bannon and Breitbart support the Nazi salute and white supremacy. “What about Steve Bannon … and Breitbart, the most prominent platform for what we just showed,” Baldwin said, referring to clips of attendees at a conference organized by National Policy Institute (NPI) President Richard B. Spencer raising their arms in what most recognize at the Nazi salute. “If you don’t want to support the alt right, don’t choose as a White House counselor a man who uses the word n****r.”While the NPI is a white nationalist think tank, and Spencer himself identifies as such, he and his organization have absolutely nothing to do with Bannon.Neither Bannon nor Breitbart has given a platform to Spencer or his organization, nor do they endorse white nationalism or white supremacy. The idea that Breitbart, an organization which employs several prominent Jewish conservatives, in any way condones neo-Nazism in any form is utterly ridiculous.

Source: Harlem Globetrotters and STOMP – The Best of YouTube – bestofyoutube.com