Posted on December 23, 2016 by binghamboatwright 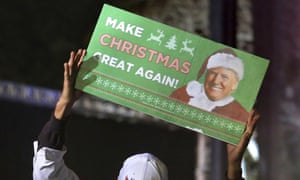 When John Tereska’s Trump-voting family members open their gifts from him on Christmas Day, they will get a shock.Inside pretty boxes they’ll find notes thanking them for making donations to organizations like Planned Parenthood and the Sierra Club that support causes expected to come under attack from the new administration.Trump protesters plan to open ‘movement house’ in Washington DCRead more“With my oldest brother, who I know voted for Trump, I’m going right for the jugular.

I’m donating to the Democratic National Committee on his behalf,” Tereska said.Tereska, an avid Hillary Clinton supporter, is so mad at the relatives who voted for Donald Trump in November that he’s giving money to progressive not-for-profit organizations in their names, in lieu of Christmas presents this year.“It’s revenge giving,” he added, with relish.

Source: Trump backers get ‘revenge gifts’ from relatives: donations to liberal causes | US news | The Guardian