Tunisian nightclub shut down over Muslim call to prayer remix 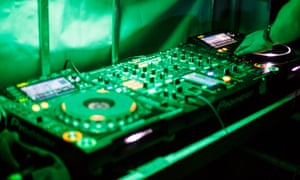 Tunisian authorities have shut down a nightclub and begun an investigation after a DJ played a remix recording of the Muslim call to prayer, an official has said.A video, widely shared online since Sunday, shows clubbers dancing to music that includes the call to prayer at the club in the north-east town of Nabeul.The footage sparked a storm of debate on social media.Two European DJs played at the party on Friday as part of a music festival near the popular resort of Hammamet.“After confirming the facts, we decided to close this nightclub” until further notice, Mnaouar Ouertani, the governor of Nabeul, told Agence France-Presse.

I get about 100 e-mail messages a day from readers of my comic strip “Dilbert.” Most are from disgruntled office workers, psychopaths, stalkers, comic-strip fans — that sort of person. But a growing number are from women who write to say they think Dilbert is sexy. Some say they’ve already married a Dilbert and couldn’t be happier.If you’re not familiar with Dilbert, he’s an electrical engineer who spends most of his time with his computer. He’s a nice guy but not exactly Kevin Costner.Okay, Dilbert is polite, honest, employed and educated. And he stays home. These are good traits, but they don’t exactly explain the incredible sex appeal. So what’s the attraction?I think it’s a Darwinian thing. We’re attracted to the people who have the best ability to survive and thrive. In the old days it was important to be able to run down an antelope and kill it with a single blow to the forehead.But that skill is becoming less important every year.Now all that matters is if you can install your own Ethernet card without having to call tech support and confess your inadequacies to a stranger whose best career option is to work in tech support.It’s obvious that the world has three distinct classes of people, each with its own evolutionary destiny:Knowledgeable computer users who will evolve into godlike non-corporeal beings who rule the universe (except for those who work in tech support).Computer owners who try to pass as knowledgeable but secretly use hand calculators to add totals to their Excel spreadsheets. This group will gravitate toward jobs as high school principals and operators of pet crematoriums. Eventually they will become extinct.Non-computer users who will grow tails, sit in zoos and fling dung at tourists.Obviously, if you’re a woman and you’re trying to decide which evolutionary track you want your offspring to take, you don’t want to put them on the luge ride to the dung-flinging Olympics. You want a real man. You want a knowledgeable computer user with evolution potential.And women prefer men who listen. Computer users are excellent listeners because they can look at you for long periods of time without saying anything. Granted, early in a relationship it’s better if the guy actually talks. But men use up all the stories they’ll ever have after six months. If a woman marries a guy who’s in, let’s say, retail sales, she’ll get repeat stories starting in the seventh month and lasting forever. Marry an engineer and she gets a great listener for the next 70 years.

Source: Men Who Use Computers Are The New Sex Symbols Of The `90s

Teen Attempts To Kill Girl For Sending Too Many Snapchats

A Utah girl was shot in the head and left for dead after two boys in her school became annoyed that she was messaging them too much on the popular Snapchat app.Deserae Turner was the victim of a murder plot by two teen boys, who previously made plans to kill her before the shooting occurred. The previous plot was, according to Sheriff Deputy Brian Groves, to slit the girl’s throat and kill her – though one of the boys later admitted that he couldn’t do it. The boys lured Turner to a canal but ultimately were unable to go through with the gruesome crime. Days later, they got Turner to meet them at the canal again and planned on following through with slitting her throat. When they once again decided they couldn’t do it, one of the boys pulled out a gun they brought as backup and shot her in the head.

Source: Teen Attempts To Kill Girl For Sending Too Many Snapchats

Minnesota pushes back against allowing ISPs to sell their users’ data

As we’ve been telling you, the US Congress (or more precisely, these specific members of the House of Representatives and US Senate) recently voted to kill the FCC’s new ISP privacy rules before they took effect.If, as expected, President Trump signs their bill, massive internet service providers like Verizon and Comcast will get more leeway in profiting from data they collect about you and your browsing habits – some of it potentially downright creepy. (“Exhibit A” might be Verizon’s AppFlash.)But the US is more than its federal government: it’s 50 states, too. And there are rumblings of rebellion in the hinterland, starting with those allegedly nice and above-average revolutionaries in Minnesota. It’s not a done deal yet, but Minnesota’s legislators seem to be moving towards tightening the state’s ISP privacy rules, no matter what Trump and the Republican US Congress do.

Data is everything today. In fact, millennials would prefer data to free McBurgers and free diet coke. But data is costly and everyone dreams of getting free data. What’s better than a free Wi-Fi connection which you can use when you want where you want. But getting free Wi-Fi connection is difficult. For that you most probably have to hack into your neighbor’s or school/college Wi-Fi connection. For hacking you need specialized training, software and a rooted smartphone.Luckily, for you there is a way through which you can get free Internet connection. An app called “Instabridge” offers you free Wi-Fi connection. Instabridge works through crowdsourcing and lists of user-submitted WiFi connections to let others access them for free. So far, thousands of network credentials have been added to the database so it is very likely that you could find a network near to you and join it for free.

A man trying to eat a half-pound glazed doughnut in 80 seconds as part of a Denver doughnut shop’s eating challenge choked to death, one of two people who died in such contests this past weekend.Travis Malouff, 42, died early Sunday of asphyxia due to obstruction of the airway, a coroner said. He had been participating in a contest to eat a doughnut the “size of a small cake,” witness Julia Edelstein said Tuesday.Winners get the doughnut for free and a button saying they won the challenge, which Voodoo Doughnuts said it was suspending, according to statement given to Denver news station KUSA-TV.The station first reported Malouff’s death, which came the same day as that of 20-year-old Caitlin Nelson, who had choked during a pancake-eating contest days earlier at Sacred Heart University in Fairfield, Connecticut.

A Swiss man is on trial for ‘liking’ Facebook posts that accused an animal rights activist of racism and anti-Semitism. The prosecution has accused him of defamation in the landmark case.The 45-year-old defendant from Zurich is facing charges after becoming involved in an online argument within the animal rights community – by merely ‘liking’ eight Facebook posts.

A Giant Ship Goes Missing in the South Atlantic

A ship that measures more than 1,000 feet long has vanished in the South Atlantic. The Stellar Daisy departed Rio de Janeiro last Sunday and was bound for China with its load of iron ore. But on Friday, while off Uruguay, the crew texted their South Korean employer to say the 266,000-ton ship was taking on water on the port side, reports Reuters. Commercial ships in the area some 1,500 miles off the coast were made aware of the situation and began searching; two Filipino crew members were found in a life raft.

But Yonhap reports that a second raft and two 30-person lifeboats were both found empty, though authorities believe the 22 missing crew members were wearing life vests. “A search operation is continuing for the 22,” says a South Korean foreign ministry official. The BBC reports the Uruguayan navy has said ships participating in the search detected the smell of fuel.

DON’T FEED GEESE: This goose in the St. Louis area has a wing deformity called Slipped Wing Syndrome or “Angel Wing” caused by the bird being fed a high protein diet while it was growing. The deformity is fairly rare and more commonly found in urban situations or in park settings where people feed the birds fortified bread and other protein-enriched foods on a regular basis and the birds don’t eat a normal diet. Unfortunately, there is no cure for the syndrome and the birds …

When Sam, a goose, was found wandering around a neighborhood in North Carolina, his wings were in terrible shape.One wing had been broken, probably by a predator. His other wing, where a tuft of feathers was sticking out, just looked awkward — but it was actually a sign of something very serious. And it likely made him vulnerable to an attack in the first place.

If you are a certain age, MOS6581 either means nothing to you, or it is a track from Carbon Based Lifeforms. However, if you were a Commodore computer fan 35 years ago, it was a MOS Technologies SID (Sound Interface Device). Think of it as a sound “card” for the computers of the day. Some would say that the chip — the power behind the Commodore 64’s sound system — was the sound card of its day. Compared to its contemporaries it had more in common with high-end electronic keyboards.

The Conversation has a great write up about how the chip was different, how it came to be, the bug in the silicon that allowed it to generate an extra voice, and how it spawned the chiptune genre of music. The post might not be as technical as we’d do here at Hackaday, but it does have oscilloscope videos (see below) and a good discussion of what it took to create music on the device.

Don Rickles, the acidic stand-up comic who became world-famous not by telling jokes but by insulting his audience, died on Thursday at his home in Los Angeles. He was 90.The cause was kidney failure, said a spokesman, Paul Shefrin.For more than half a century, on nightclub stages, in concert halls and on television, Mr. Rickles made outrageously derisive comments about people’s looks, their ethnicity, their spouses, their sexual orientation, their jobs or anything else he could think of. He didn’t discriminate: His incendiary unpleasantries were aimed at the biggest stars in show business (Frank Sinatra was a favorite target) and at ordinary paying customers.