Catching Up With the Unabomber. When Does the End Justify the Means?

The Unabomber, known as Ted Kaczynski, was not a fan of technology. To expose the world to his anti-technology philosophy, from the years 1978 to 1995, Kaczynski sent 16 bombs to universities and airlines, killing three people and injuring 23, before he was eventually caught and sent to prison. He remains there today. At one time, he was possibly the most famous criminal in the world.

He said of technology’s role:

The system does not and cannot exist to satisfy human needs. Instead, it is human behavior that has to be modified to fit the needs of the system. It is the fault of technology, because the system is guided not by ideology but by technical necessity.

In his essay Industrial Society and Its Future, Kaczynski argued that while his bombings were “a bit” extreme, they were quite necessary to attract attention to the loss of human freedom caused by modern technology. His book Technological Slavery: The Collected Writings of Theodore J. Kaczynski, a.k.a. “The Unabomber” breaks all of his philosophies down for those of us that just know him through corporate news stations.

Was the Unabomber crazy, or just so sane he was blowing our minds?

I talked to David Skrbina, confidant of Kaczynski, and philosophy professor at the University of Michigan. Skrbina wrote the intro to Technological Slavery.

Can you tell me a bit about how you and Kaczynski began to communicate? Are you still in touch with him today?

Back in 2003, I began work on a new course at the University of Michigan: ‘Philosophy of Technology.’ Surprisingly, such a course had never been offered before, at any of our campuses. I wanted to remedy that deficiency.

I then began to pull together recent and relevant material for the course, focusing on critical approaches to technology. These, to me, were more insightful and more interesting, and were notably under-analyzed among current philosophers of technology. Most of them are either neutral toward modern technology, or positively embrace it, or accept its presence resignedly. As I found out, very few philosophers of the past four decades adopted anything like a critical stance. This, for me, was highly revealing.

Anyway, I was well aware of Kaczynski’s manifesto, “Industrial society and its future,” which was published in late 1995 at the height of the Unabomber mania. I was very impressed with its analysis, even though most of the ideas were not new to me (many were reiterations of arguments by Jacques Ellul, for example—see his 1964 book The Technological Society). But the manifesto was clear and concise, and made a compelling argument.

After Kaczynski was arrested in 1996, and after a year-long trial process, he was stashed away in a super-max prison in Colorado. The media then decided that, in essence, the story was over. Case closed. No need to cover Kaczynski or his troubling ideas ever again.

Flight of the RFID tag 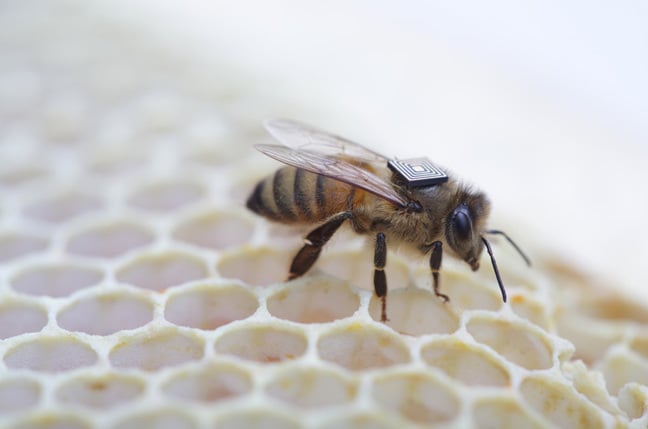 Scientists want to electronically tag the world’s honeybees in a bid to understand the mass death of entire populations.

The Commonwealth Scientific and Industrial Research Organisation (CSIRO) in Australia has called for a global project fitting bees with micro-sized RFID chips to gather critical data.

Data would be harvested to generate 3D models of the bees’ activities whilst on the move.

The goal is to follow the bees’ behavior and identify their response to factors that might generate stress, thereby affecting their health and attempts to pollinate plants.

CSIRO made the call Tuesday having already successfully tagged more than 10,000 bees in Hobart, Tasmania.

Data generated by the study would be used by scientists, beekeepers, primary producers, industry groups and governments.

“The tiny technology allows researchers to analyse the effects of stress factors including disease, pesticides, air pollution, water contamination, diet and extreme weather on the movements of bees and their ability to pollinate,” de Souza said in a statement.

The World Doesn’t Exist to Not Offend You

Another Reason to Use an Ad Blocker: Malvertising Has Tripled This Year

Proponents of ad-blocking software may have another reason to continue blocking ads.

A new report from cybersecurity firm Cyphort published this morning notes that instances of malware served via online advertising networks increased 325 percent between June 2014 and February of this year. The report notes that several high-profile websites, including the Forbes, Huffington Post, and LA Weekly, served malware via their ads in that time frame.

Spreading malicious software, or malware, via online advertising networks is commonly referred to as “malvertising,” and, according to Cyphort, is seen by cybercriminals as being particularly effective because compromised ads are visually indistinguishable from safe ads.

Heinz ordered to drop ‘ketchup’ from labels in Israel

JERUSALEM, Aug. 24 (UPI) — The Israeli government ordered food maker Heinz to stop using the word “ketchup” in its labeling due to the low amount of “tomato solids” in the product.

The Health Ministry ordered Heinz to remove the word “ketchup” from its labeling in favor of “tomato seasoning” following lobbying by Osem, Israel’s leading ketchup manufacturer.

Osem accused Heinz of having only 21 percent tomato concentrate in its ketchup instead of the 61 percent it claims in advertising.

Woman lies about being kidnapped to get out of work

A woman in Florida lied about being kidnapped because she didn’t want to return from her work break, according to a Panama City Police Department news release.

A concerned co-worker had reportedly called 43-year-old Beverly F. Brooks around 2:30 a.m. Monday when she noticed the night nurse hadn’t returned to her shift. Brooks allegedly told the co-worker that her boyfriend was holding her against her will, and the boyfriend, 35-year-old James Vincent Hill Fennell Jr., could be heard in the background telling Brooks that she was not getting out of their car.

The PCPD and five other law enforcement agencies spent several hours looking for the couple before finding them in Port St. Joe, at which point Brooks admitted she had made everything up simply because she didn’t feel like going back to work.

Banks Get Credit for Helping the Poor — By Financing Their Evictions?

In 1977, Congress wanted to make sure commercial banks fulfilled their commitment to serve all communities in America, regardless of income level. “A public charter conveys numerous economic benefits,” said William Proxmire, then head of the Senate Banking Committee, “and in return it is legitimate for public policy and regulatory practice to require some public purpose.”

Under the Community Reinvestment Act, banks are periodically examined for how well they provide lending and investment to low- and moderate-income (LMI) neighborhoods where they take deposits. Since its enactment, 97 percent of all banks examined have received a “Satisfactory” or “Outstanding” grade, according to the Congressional Research Service.

And yet lending and even basic financial services remain hard to come by for the poor. In the Federal Deposit Insurance Corporation’s most recent survey, over one in four American households have either little or no access to traditional banking. Fully 93 percent of all bank branch closures from 2008-2013 happened in low-income neighborhoods, which has dramatic effects on the availability of small business loans. Poor people without access to credit turn to predatory payday lenders that trap them in a cycle of debt.

What’s the disconnect here? How can practically every bank get a satisfactory rating for lending to LMI communities for almost 40 years, yet serious problems with lending to the poor persist?

The problem is that regulators implementing the Community Reinvestment Act have not kept pace with innovations the banking industry uses to get out of its commitments. “Regulators have not been scrutinizing the purported CRA-eligible activities to the extent we need,” said Kevin Stein of the California Reinvestment Coalition. In fact, some of those activities, far from helping low-income residents get a leg up, are actively harmful, but banks aren’t downgraded for such pursuits.

The CRA includes several perfect conditions for banks to game the system. No one agency oversees the law: The FDIC, the Federal Reserve and the Office of the Comptroller of the Currency all separately conduct examinations on different banks. These regulators do not mandate lending quotas. They subjectively assess a range of activities banks engage in, from maintaining bank branches to investing in capital projects in LMI neighborhoods to holding financial literacy sessions to offering remittance services.

The cause of those who feel that information wants to be free, and that academic research should always be, have a new tool: a guide to defeating tracking traps that could identify document leakers.

“We are at war,” Harding says.

“Remember this is serious business; people are getting arrested for sharing information.

“Elsevier has filed a John Doe lawsuit against (academic file sharing network) SciHub and Libgen is also under attack with the High Court blocking access in the United Kingdom.”

Harding says authors should be contacted before publishing, and asked for permission to broadly distribute their work, but argues the literature should be published with or without approval.

Activists, notably the late Aaron Swartz, have argued that academic works should be freely and widely accessible online so that disadvantaged people can access the literature and not just those privileged enough to have access to libraries.